It’s a little late but happy holidays to my dear readers. I intended to post a blog with a Christmas greeting, but simply could not find the time to do so. I do, however, hope that you have all had a lovely Christmas, or if you do not celebrate, at least had some nice down time.

The past two weeks have been pretty hectic, but also very fun. I miraculously seem to have made all my deadlines. I finished a draft of my chapter at the beginning of the month,as well as a draft of my book review last week and just completed a draft of my three articles for the Companion to Victorian Popular Literature. And… I also managed to finish my best’s friend Christmas card on time!

It’s not entirely perfect, but since I had not drawn anything in about 8 or 9 years, I am quite pleased with the result haha.

I also completed the first part of the super special, ultra secret Christmas surprise. My mother had always said that I had a great voice for either voice acting or recording audio books. So…. I decided to record A Christmas Carol by Charles Dickens for her and my dad (in English of course). Due to my unexpected and very much unplanned throat infection, I got behind massively with recording, so decided to cut the project up in three parts. I gave them part 1 (stave 1 in the book) for Christmas.The other parts will follow later (on other special occasions). Thankfully, my parents really loved it. My mom immediately said she was going to listen to it again today haha.

And as I wrote in a previous blog post, this project has really helped me to like myself a little better. In the past I really did not like to hear my own voice. But whilst listening to the recordings to check for errors, I realized that my voice is not nearly as childish or high pitched as I always thought it was. It also made me realize that people are not kidding of flattering me when they tell me I sound like a posh Brit. I really do have an accent that is not unlike Emma Watson’s. Which is quite an accomplishment I suppose considering I am 100% Dutch haha.

I also had some non-deadline related events planned. On Tuesday December 22, I met up with a friend who I had not seen for two years. We had a lovely time shopping and just sitting down to chat over lunch. It was really nice to talk to her again and we promised each other that we are not going to wait another 2 years before we see each other again. hopefully we will be able to meet in January, but otherwise definitely in February.

My best friend and I got together on Christmas eve to exchange presents and to celebrate Christmas, which was awesome. It’s just nice to be able to catch up again as the both of us a pretty damn busy haha. Next to a handmade Christmas card she also got me a lovely Disney Christmas ball with the three bears from Brave in it, and a super pretty bookmark in the form of a quill.

During Christmas day my fiancé and I first had a nice Christmas breakfast and exchanged presents. He got me the best mug ever! It is a mug with an image of Marauder’s map from Harry Potter on it, which appears when the mug heats up.

Needless to say, I have been using this every day!

After a bit of relaxing we also had to get the house ready as my parents would come to visit on Boxing day and be staying over. As my mom is allergic to cats, we pretty much had to do a Spring cleaning in Winter :P. And don’t worry, we also relaxed a little that day.

The second day my parents arrived in the afternoon and we had a really lovely time. Everyone loved their presents and I totally got spoiled! The highlight for me though, was this Mickey and Minnie Victorian Christmas countdown calendar… I had seen it in a Disney store about three years ago, but decided not to buy it as I wanted to buy some other Christmas decorations. I intended to come back for it later on. However, when I returned it was sold out and I have been trying to get my hands on it ever since. This year, the Disney store temporarily restocked the calendar…. And now I have it. 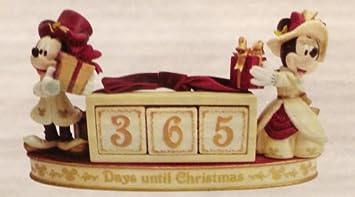 It’s Disney, Victorian and Christmas combined… This thing is me to a t haha.

In the evening we ended up having meat fondue with lots of fatty sauces and bread… so I am pretty sure I have gained quite a bit of weight after ahaha.

Thankfully, though, I actually look forward to eating healthy again, so I hope the scales won’t be too hard on me coming Sunday…. Though taking that it is going to be New Years Eve on Saturday, I am not so sure.

Well my readers I am not going to wish you a happy new year yet, as I am planning on posting another blog before midnight on Saturday. So please look forward to that ;).

14 thoughts on “Christmas and deadlines”

Welcome to my blog. My name is Marjolein and I'm a 32 year old archivist who is struggling to maintain her weight whilst battling Chronic Fatigue Syndrome. Please click here for more information about me.